Get exclusive farm updates, helpful tips for your health, and promotional offers!

Is Beef The Worst Food For The Climate?

Have you heard that beef is the worst food for the climate?

Recently, I watched this YouTube video called “Why beef is the worst food for the climate” sharing how it is contributing to climate change.

Feel free to watch this video for yourself, she almost convinced me that beef is the worst food for the climate until I put on my critical thinking cap. 😉

This might surprise you, but I actually agree with her title almost, just would add one more word to it. I share shortly.

Let me quickly unpack what the video shares in a nutshell.

The video gives a visual bar chart of how common foods in everyday consumption contribute to climate change. First, the lady breaks down each food’s CO2 emissions from the processing, transportation, packaging, and selling of these foods. Second, she shares the CO2 emissions from growing and processing food for each common food. Next, she points out the biggest contributor of emissions in certain foods is the farming process and land use change.

The farming process in the case of ruminant animals (cows, sheep, goats) she points out have a large impact on the emissions, because they emit methane from the rumen due to enteric fermentation (the process of microbes breaking down the grass fiber). Methane holds more heat and therefore global warming potential is 21x higher than CO2.

Lastly, she points out that land use change is highly impacted in cattle farming, due to cattle ranches deforesting land.

In her conclusion, to decrease emissions and prevent climate change, we should stop eating beef because beef is the largest contributor climate change compared to all other common foods we consume.

Based off her research and bar chart, it sounds like the right conclusion.

As I shared above, I agree with that statement but would add one word to the statement. “Why FACTORY beef is the worst food for the climate”

We can criticize cattle all we want for contributing to climate change, but maybe we are to blame how we raise cattle, not the cow?

Most cattle are raised on what is known as a cow calf operation. They usually are on pasture, however, most of these farmers do not understand responsible grazing. The pastures usually end up being overgrazed on these farms and farmers spend a lot of time, energy, and fossil fuels to making hay or purchasing it to feed to their cows due to lack of pasture. I’ll explain why the over grazed pastures are a problem in a little bit and how deforestation of land to overgrazed pasture does have a negative effect to green house emissions.

Then once the calves are weaned from their mother, they will get shipped out to a feedlot and grain becomes their diet until slaughter. Here’s the issue with the feedlot model. Each year, the farmer and his tractors expend fuel, time, energy to till the fields and plant the crop. Then again, the tractor goes out to spray and fertilize the crops a few times during the summer. Finally, then the combine harvests the crops in the fall and trucks the feed to a storage sight. Wait, it doesn’t stop there, then the corn/grain usually needs to be dried down by a giant dryer (burns a lot of fuel to dry) to keep good in storage. Then when the farm needs corn to feed the cattle, the grain it trucked to the farm. Then it is ground and loaded into the feed truck. The feed truck deliveries the grain to the cattle. Then the cattle hang out eating the grain on these concrete or dirt lots (no pasture), pooping and farting. But now the farm needs to do something about all the manure that building up in this feedlot. They now need to remove all the manure and spread it out on the fields with machinery. Finally, the cattle are fat and sent to the processor for beef. Meanwhile the farmer was lucky to make a profit after all that work.

Now this sounds like quite the process to raise and feed the cattle, I know, because I worked on a farm like this. It is a lot of work. However, how much fossil fuels were burned with all the equipment…. tractors, trucks, drying, grinding, fertilizer, chemicals? How much time and energy were spent by the farmers for this process? A huge one is how much carbon is released into the atmosphere every time the field gets tilled. Unfortunately, many farmers are becoming addicted to tractors, and never stopped to think, a cow has 4 legs and a mouth? What if I moved the cows to their feed and let them harvest the feed themselves? Meanwhile they can spread their manure out on the field as they are eating.

Also, I just want to clarify in case you didn’t know, but most pastures are perennials, if they are managed correctly, reseeding the pastures isn’t necessary. So once it’s established, we don’t need to worry about doing all that I explained above year after year with the tractors. Corn is also a grass, but it’s an annual and requires all that I explained above to grow year after year.

Now can you see how having the cattle out grazing can eliminate a lot of fossil fuels, carbon releases, and arguably a lot of time and energy from the farmer?

Right! What if we managed the cattle differently and how would that improve their so-called contribution to global warming?

What I explained above is only a portion of this issue. She said the cow’s farts and belching are the biggest problem because they are ruminants. How does having them on pasture solve that problem?

Let’s address this problem, because I hinted in the beginning with how most cow/calf farmers haven’t managed their pastures well and also contribute with their farming methods.

Cattle are a key part to the ecosystem and as herbivores they have a symbiosis relationship with grasses. As grass lands grow, the grass has a very vital time for grazing. When it isn't grazed, it goes into a dormant stage where it is old and strawy, it's effectiveness in photosynthesis (the process of capturing sunlight and carbon dioxide from the atmosphere) decreases. Photosynthesis is a key part of this system, as it breaks down the CO2 in our atmosphere, it puts the carbon molecule into the soil, which we call “carbon sequestration.” If the cattle continually over graze the grass, they stunt the grass and likewise won’t be affective in photosynthesis just as the over mature grass. Ideally, we want the grasses to be at a mature stage for grazing, not too short, nor too old, because this is when we maximize photosynthesis in the grasslands (also this is when the grass is best nutritionally for the cattle). Manage the cattle to graze the grass lands at the right time, with rest periods, and they are contributing to more carbon sequestration than many forest. This is the power of having livestock managed on the land vs on a concrete lot and what we are trying to achieve as regenerative farmers. Some of my mentors that I follow, they call themselves the “carbon cowboys” for this very reason. They are farmers teaching how crucial it is to responsibly manage our pastures and animals.

Here's a quick little chart of a farm called White Oaks Pastures. They have been practicing holistic regenerative farming practices for 25 years now and have seen dramatic results. A study performed on their farm showed that they in fact have a -3.5-carbon footprint on the environment based on their farming model. Check out the chart. 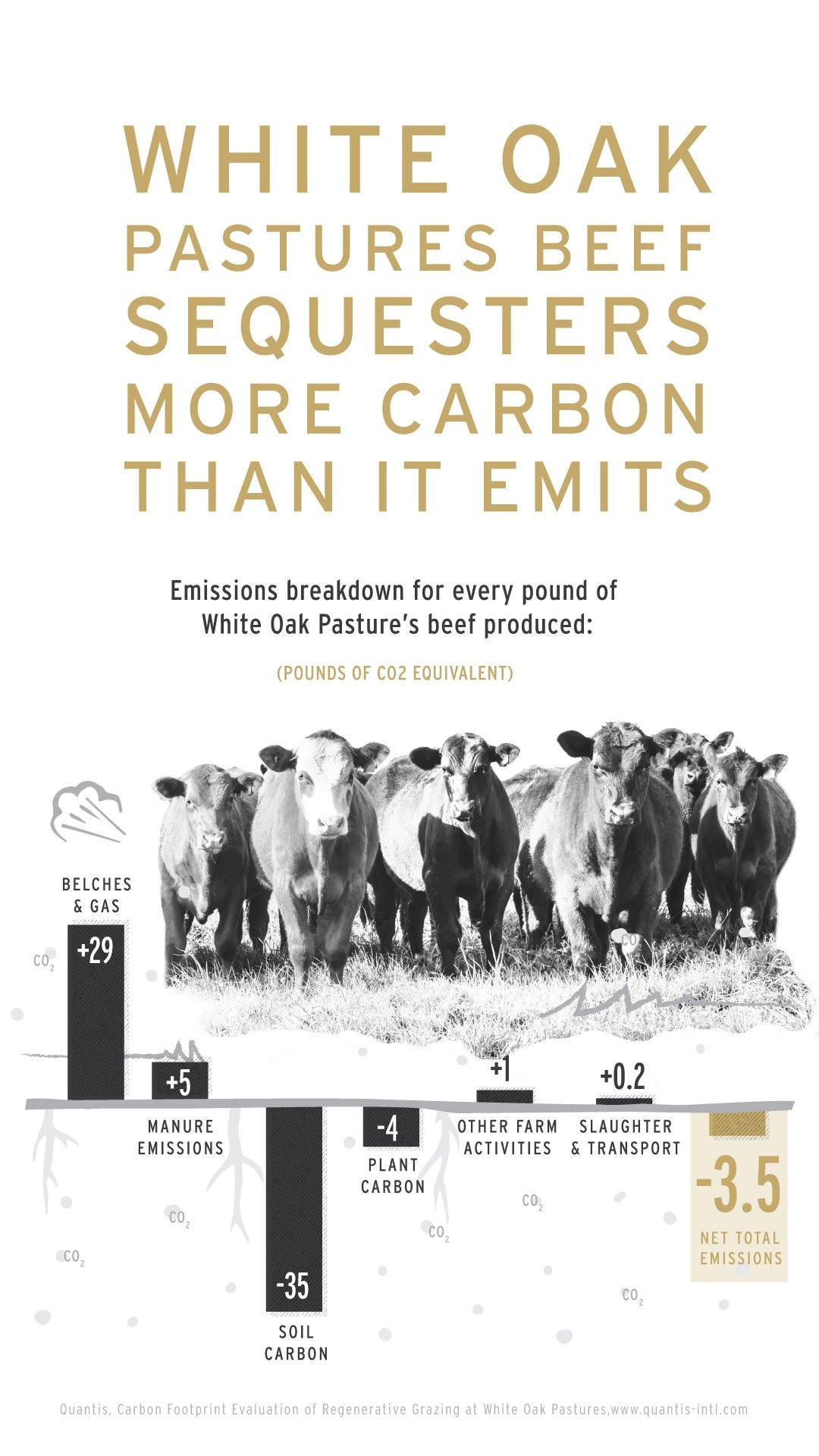 As you can see from the chart, this management practice doesn't stop the cow's methane belches and gas, but the holistic grazing puts so much carbon into the soil is more than makes up for the problem.

Now that you can see the benefits regenerative farming is having, you can see how eating beef from a responsible grass-based farmer is crucial for protecting our climate. If you got the time, I encourage you to watch this Ted Talk.

This is a reason, why when I go out to eat, I usually just don’t eat beef, unless I know it was responsibly raised by a regenerative grass-based farmer. My food dollars vote for my future world I want. ( and some say I'm a food slob haha)

Keep eating local, grass-fed, and know your farmer’s philosophy and you will be helping to reduce the carbon food print. 😊

P.S. On a side note they also compared their farm's beef to the “impossible burger," we’ll have to discuss this one in the future as it’s super interesting! 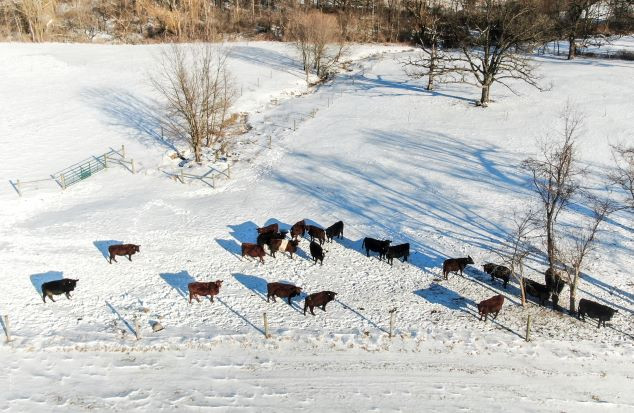 Why are the grocery meat prices rising? 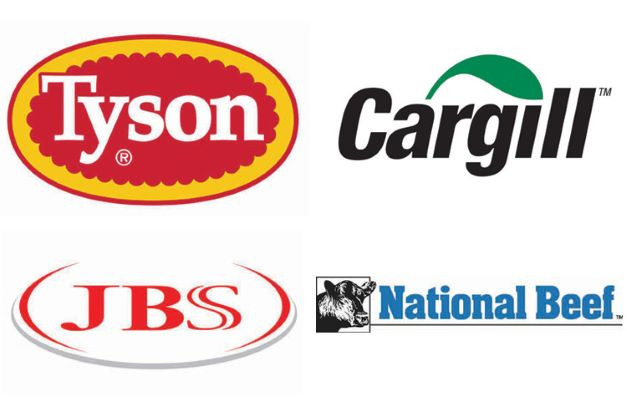 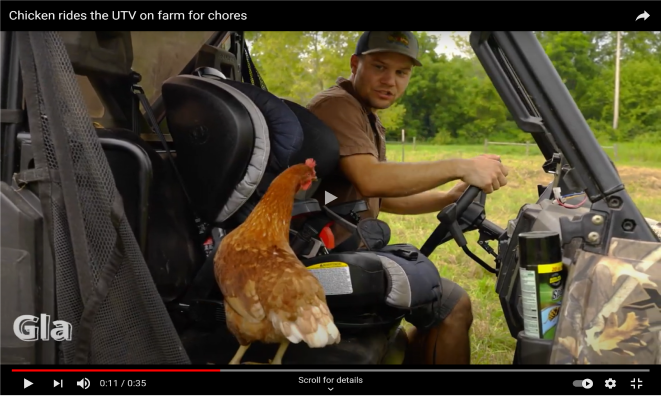 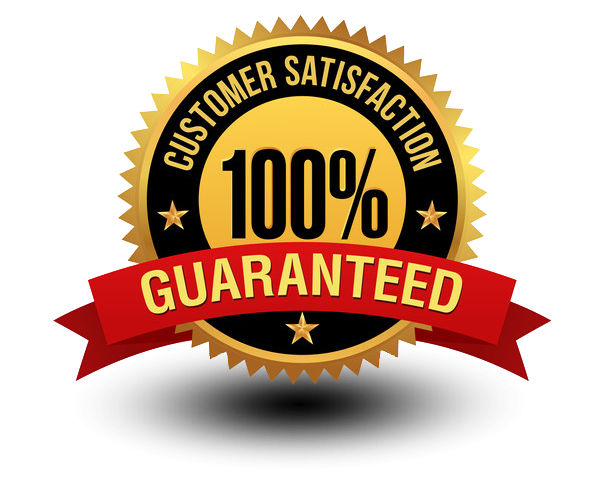